Glenwood Caverns Adventure Park gets all decked out just for the holiday season, but  at these theme parks it’s Christmas all year round!

Many theme parks dress up for Christmas—not only Disneyland and Universal but also smaller parks. Dollywood has its Smoky Mountain Christmas Festival, Sesame Place its Very Furry Christmas, Silver Dollar City its Old Time Christmas, Six Flags its Holiday in the Park, Lake Compounce its Holiday Lights, Cliffs its Cliff’s Magical Christmas, Hersheypark its Christmas Candy Lane. Knotts Berry Farm its Knotts Merry Farm, and more. These parks come as they are – they’re Christmas all year round (except for after-Christmas winter months when some close):

Santa’s Workshop in North Pole, N.Y., opened in 1949, six years ahead of Disneyland, and claims to be the forerunner of U.S. theme parks. The developer, Julian Reiss, had made up a story for his daughter about a baby bear who found Santa Claus and his workshop. The girl wanted to visit the place, so he built it. The park has child-oriented rids including Candy Cane Express train, a sleigh coaster, carousel, Ferris wheel and talking Christmas tree.

Santa’s Workshop in Cascade, Colo., opened in 1956, is a village where you can meet the North Pole crew from May through Christmas Eve. It has 28 rides, mostly geared toward children, including a high-altitude Ferris wheel, Peppermint Slide, and Candy Cane Coaster.

Holiday World & Splashin’ Safari Water Park in Santa Claus, Ind., has separate holiday-themed areas for 4th of July, Halloween, Thanksgiving, and Christmas. Many of the rides are geared toward children, but the park also has a Thunderbird roller coaster and two large waterslides, among other family and thrill rides.

Castle Noel in Medina, Ohio, is all indoors but includes a Blizzard Vortex tunnel, Santa’s Chimney Squeeze, and a 25-foot animated Christmas tree. Its major attraction is a huge collection of props from a dozen Hollywood Christmas movies and traditional Christmas displays from upscale New York department stores. You can even ride the red slide like Ralphie in “A Christmas Story.” Santa’s Enchanted Forest in Miami claims to be the world’s largest holiday theme park. It has more than 100 rides, shows, games, attractions, and a free carnival. In addition to the child-focused rides, the site has thrill rides and roller coasters for adults and families. The park is open from mid-October through early January.

It’s the most wonderful time of the year! Visit Glenwood Caverns Adventure Park over the holidays and enjoy Winter on the Mountain which includes holiday festivities such as visits from Santa, fire pits for roasting s’mores, live music and entertainment, as well as theme park rides and family attractions, cave tours and more. 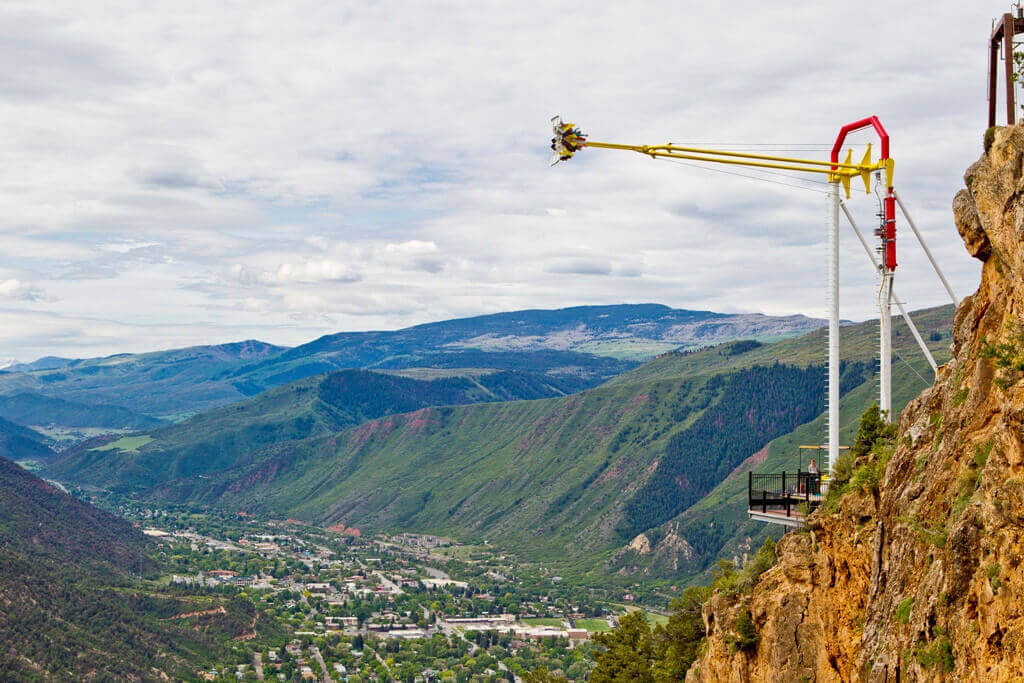 You won’t find a theme park on top of a mountain, much less inside a mountain, anywhere but Glenwood Caverns Adventure Park. But if you’re interested in collecting a variety of rolling, watery, funny, tasty, accessible, thrilling, and good old-fashioned theme parks, we like this list from Grandparents.com.

Founded in 1963 and family-owned until 2001, this 48-acre park calls itself a Kingdom for Kids. It has more than 35 rides, attractions, and shows, including a water play area, three roller coasters (one wooden), a log flume, a riverboat ride, animatronic dinosaurs, bumper cars and high-dive shows.

Knoebels was founded on July 4, 1926, and is still family-owned. Part of its attraction is free admission, free parking, free entertainment and free picnic facilities. The park has more than 60 rides and attractions, including six roller coasters (one wooden), arcade games, mini-golf, a bald eagle habitat and two carousels originally built more than 100 years ago. You can still catch the brass ring for a free ride.

Opened in 1946, with the water park added in 1993, this 125-acre family-owned park was one of the first to offer unlimited soft drinks to visitors. The park is divided into Christmas, Thanksgiving, Halloween and 4th of July themed sections, with food and music as well as rides reflecting the season. It has three wooden roller coasters, one steel coaster and two water coasters.

Opened in 1988, with the water park added in 2003, this 413-acre playground is the northernmost U.S. theme park. It has 66 rides and attractions, including one of five giant inverted boomerang coasters in the world, five other roller coasters (two wooden), a Ferris wheel, bumper boats, a drop tower, a log flume, water slides, two wave pools and a popular steam train.

This family-owned playground, opened in 1974, with the Adventure Bay water park added in 2010, has more than 100 rides, shows, and attractions, including five roller coasters and a whitewater river raft ride. It has numerous kid-friendly rides, a petting zoo and three game areas – Alpine Games, County Fair, and Dragon Island.

Lake Compounce, founded in 1846, is the oldest continuously operating amusement park in the United States. The 332-acre playground was completely renovated after it opened under new management in the mid-1990s. It has 44 rides, including one of the oldest wooden roller coasters in the world and one of the newest, the mountainside Boulder Dash, among its five coasters. Lake Compounce, where cold drinks are free at hydration stations, also has a lakeside train ride, a drop tower, a Ferris wheel and a log flume.

Built in 2010 by Gordan Hartman after his daughter was born with cognitive and physical delays, Morgan’s Wonderland is the world’s first theme park designed for children with special needs, although it is open to everyone (the accessibility is also convenient for older adults). The 25-acre nonprofit park has about 25 wheelchair-accessible attractions, including a carousel, Ferris wheel, train ride, wheelchair swings and Sensory Village. The three-acre Morgan’s Inspiration Island water park was added in 2017. Children with disabilities are admitted free.

Knott’s Berry Farm started on a berry farm that also sold preserves and pies in the 1920s, then added restaurants and shops, and finally built a Ghost Town in 1940. It expanded with a Camp Snoopy in 1983 and was sold by the family in 1997. Soak City, a water park, was added in 2000. The playground has five themed areas – Ghost Town, Fiesta Village, The Boardwalk, Camp Snoopy and Indian Trails. It has 35 rides, including nine roller coasters, two water rides and train rides. Knotts.com

This center in New Orleans City Park is focused on the 1906 Live Oak Ladybug Rollercoaster, locally known as the Flying Horses but has 16 other rides including a drop tower, a Ferris wheel, a roller coaster, a Tilt-A-Whirl and a miniature train. It is closed for most of the winter.

Cedar Point, opened in 1870 and second only to Lake Compounce for longest-running park, attracts more than 3.5 million visitors a year, the most of any seasonal theme park. The 365-acre playground has more than 70 rides, including 16 roller coasters, two water rides, a 136-foot Ferris wheel, a 1912 carousel,and a train ride along Lake Erie. Performances are in the Extreme Sports Stadium, the Celebration Plaza Stage and smaller venues.